The nauseant smeel he gave off his mouth saturated all the room with such a bad smell that it persisted even when he had gone away... 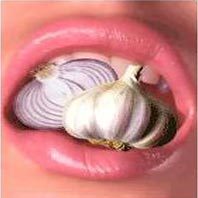 ...This is the beginning of an horror book, but don't be so tragic if you suffer from halitosis, well known as bad breath. 50% of the world population suffers from this disorder in a more or less serious way.

Breath, constituted by the air we breath out, is composed by water vapour, some gases and miscroscopical waste. Breath is odourless if you are healthy and you do not neglet oral higiene. Sometimes it changes and it takes on a particular smell which allows us to understand its causes. Let's think about how many mums understand if their children suffer from acetone thanks to the smell of their breath or, how we understand immediately that our interlocutor ate recentely garlic or onion thanks to the smell (it is only a manner of speaking) of his breath while he is friendly talking with us at close range.

How many and which kind of halitosis exist:

Basically there are 2 kinds of halitosis­:

Which are the main causes of halitosis?

90% of the possibilities is caused by:

The remaining 10% is caused by:

How can we treat halitosis?

If we read carefully the previous paragraph, it is easy to understand that in more than 90% of the possibilities bad breath can be treat just with dental cures. Thus, who suffers from bad breath at first must be examined by a good dentist. When the doctor understands the main cause of the problem, will be able to show the patient how to take care of his oral hygiene and, at the same time, to treat, with precise cures, the possible dental or gingival pathologies he may have even though he is not aware of them.

- use a dental floss at least once in a day

- brush your teeth after every meal (use a toothbrush with artificial bristles and toothpaste containing "fluorine");

- use regularly a good mouthwash, containing antiseptic substances;limit the assumption of food and drinks which can provoke bad breath (read the paragraph "Which are the main causes of halitosis?")

Are there means, methods or instruments which can establish halitosis?

- rub your tongue on a well cleaned and oudorless wrist, wait for some seconds and smell it;

- let your tongue out as much as you can and rub its surface twice or three times on a sterile gauze. Wait for 40 seconds and smell the gauze.

On the contrary, to blow on the palm does not provide with any information;

In a near future, all the dentists should have this important tool, because the problem of bad breath is increasing. What do you think if yuour dentist will examin you with an organoleptic proof?